New Advances by JET and NIF 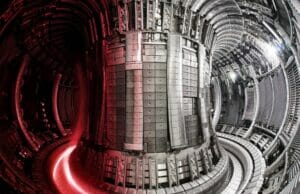 The world’s two largest government-funded fusion experiments, the Joint European Torus (JET) in Culham, UK and the National Ignition Facility (NIF) in Livermore, Ca., both announced significant advances in the past month.  JET stated in a February 9 press release that they had broken their own record for fusion yield. NIF published in the leading scientific journal Nature the achievement of a “burning plasma” and a new record fusion yield as well. What is the significance of these achievements and how do they affect other fusion efforts like LPPFusion’s?

NIF’s advances represented the greater rate of improvement, especially in terms of fusion yield. The $5 billion NIF device, completed in 2009, uses 192 giant lasers to concentrate energy on a tiny pellet of deuterium-tritium fusion fuel. (Deuterium and tritium are isotopes of hydrogen.) While it is the claim that the Nature article most emphasizes, the “burning plasma” milestone is less significant. Burning plasma is, by the NIF’s scientists’ own definition, one in which the power generated by fusion reactions exceeds that supplied by external sources—in this case the lasers. But getting above that threshold does not in fact guarantee by any means that the fusion reaction will sustain itself. That more challenging threshold is when fusion energy generated exceeds the energy lost by the plasma, so it heats up by itself. This condition is termed “ignition”, the central goal of NIF, as indicated by its name.

But the Nature article also refers to the August, 2021 shots that produced 1.3 MJ of fusion energy. This is a big step forward for NIF. By 2013 NIF’s maximum fusion yield was 10kJ, little more than 0.002% of the more than 440 MJ fed into each shot of the machine. In 2018, NIF’s maximum yield rose to 54 kJ. The new results of 170 kJ in the “burning plasma” shots and 1.3 MJ in the August 2021 shot are thus major increases, with the last one producing 25 times as much energy as in 2018.  This rapid progress in the course of the 2021 experiments does demonstrate how major advances in fusion can happen quickly, and could help the credibility of other fusion efforts like our own.

However, NIF remains far short of the real goal of all fusion energy research—producing more energy out of a device than is put into it. The latest record is still only 0.3% of the input energy. In addition, NIF is physically incapable of achieving net energy production. Even if all the fuel in the pellet underwent fusion reactions, which is almost impossible, the total energy released would still be only 15% of the energy fed into the gigantic machine in a single shot.

JET’s new results actually managed to somewhat exceed NIF’s in terms of the critical ratio of fusion energy out to energy input to the device. JET is a tokamak, a $3 billion machine that uses magnetic fields produced by external magnets to confine the plasma where the fusion reactions take place. The new result produced a fusion yield of 59 MJ from an electrical input to the machine of a giant 10 GJ, so fusion energy was 0.6% of input energy, double the NIF result. While NIF certainly could point to rapid progress, the JET result somewhat more than doubled JET’s previous record with the same DT fuel that had been achieved 25 years ago in 1997.

How do these new results compare with those at LPPFusion? The fusion yields and even ratios to input energy can’t be directly compared because LPPFusion is using pure deuterium fuel, not the much-more-reactive DT fuel. Since tritium is radioactive, expensive and time-consuming efforts would be need just to get a license to use it. Also, DT’s use would make our entire small facility radioactive. As a result of this radioactivity, both NIF and JET must be maintained mainly via remote-controlled robots.

If JETs best results using DD fuel are compared to LPPFusion’s best result using the same fuel, JET is only a little in the lead, with a ratio of 0.6 J of fusion energy for every 100kJ of input. LPPFusion best results are 0.4 J of fusion energy for 100kJ of input. Our goal is to surpass our old 2016 record and JET’s DD results in the present series of experiments. In order to match or exceed the DT fusion yield ratios, we will have to move to using pB11 fuel, which is also far more reactive than pure deuterium.

In terms of ion temperature, LPPFusion already holds the world record, with demonstrated confined ion energy of over 200 Kev (equivalent to over 2 billion K), far higher than the 10 keV reached by JET and the 5 keV reached by NIF. However, NIF achieved enormously higher densities than any other fusion device, while the record for confinement time is actually held by another tokamak, EAST, in China. The combination of density, temperature and confinement time needed to achieve net energy has not yet been achieved by any experiment.